Dr. Khorsandi holds PhD in biochemistry and also is the director of the Photodynamic Therapy...
Jan 07, 2020
Share this post

Dr. Khorsandi holds PhD in biochemistry and also is the director of the Photodynamic Therapy Research Group in ACECR. She has done a lot of research on cancer and photodynamic therapy as well as wound healing using antimicrobial photodynamic through nanoparticles. She was the secretary of the international section and student section of the 6th Congress of Wound and Tissue Repair (WTR) in Tehran.

The internationality of Wound Congress has provided a way for more scientific interaction with other countries. What countries have been the most involved and cooperated?

We have the most cooperation with Pakistan, Turkey and Germany, and we have had articles and lectures from the United States, Canada, Iraq and Lebanon. Due to US sanctions, many people cannot come to Iran easily. But researchers in other countries have had scientific and research contacts with us and we are trying to eliminate the negative mentality of Iran. Fortunately, we have good relations with the neighboring countries and we try to hold some joint workshops. At this congress, we worked together with Pakistan and Turkey.

How do you see the state of wound research in the area?

Pakistan is very strong in the field of biotechnology. This year, as a representative of the Laser in Medicine Research Group and Yara Research Institute, I was present at the Scientific Committee of the First International Conference on Recent Updates in Biotechnology (ICRUB) in Pakistan. Many people were eager to come to the Iranian Congress, which unfortunately didn't have enough time and they were scheduled to attend next year. At this conference, a Memorandum of Understanding was signed between the Wound Congress of Iran with Abdul Wali Khan University of Pakistan as one of the major scientific centers in biotechnology. A Memorandum of Understanding has also been signed with the Yara institute of Turkey on wound research. Both of these centers were actively present at Wound Congress of Iran.

Please explain about Startup Weekend, an Innovative program in the student section of the Congress.

We organized the Top Idea Program in 2017, which students submitted ideas and presented to Congress and Three top ideas were awarded. By upgrading this program, we transformed the top idea into Startup Weekend. The first meeting held on November 4th. 16 teams participated and 7 teams selected for the final. The 7 teams presented their ideas on the first day of the congress. The next two sessions and closing ceremonies will be held in December. At the closing ceremony, the top 3 ideas were selected. Startup weekends are usually held on consecutive days. But we planned that the first selected ideas to be presented in Congress and after the analysis, again, ideas will present a month later. At that time, they will have a different view of ​​their idea. In the next years, this will be developed and some workshops will be created.

Thank you for talking to Meezgerd.

I thank you too, and I hope Congress has been helpful to all audiences.

Wound and Tissue Repair Congress was held in Tehran 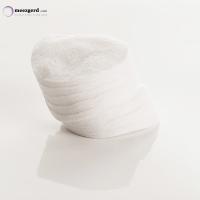 More from this category

"The variety of wound products in Iran is greater than the other countries in the region. Therefore, wound care has good job opportunities and a great market in Iran." "Fortunately, unlike other products that have become more expensive as a result of sanctions, wound products have not increased much
Read more...
0

We preferred to focus on the needs of the Iranian market and not work on all Covalon products. We are known as one of the largest suppliers of silver antimicrobial dressings in Iran In a situation, in which it is economically easier to import a product from countries like China, we have accepted the
Read more...
0

"If we want to say which brands are successful, it depends on the quality of the brand, the specific products of that brand, the availability of the brand and the conditions of our people" "Due to the economic contraction, important brands have concluded that if they want to have a stable presence
Read more...
0

"Our market share has increased this year, and we have had a progressive growth" " It may not be possible right now, but in the future, Treetta will be strong enough to meet many needs " "Last year we were selected as the best medical equipment manufacturer in the country. The reason we are selected
Read more...
0